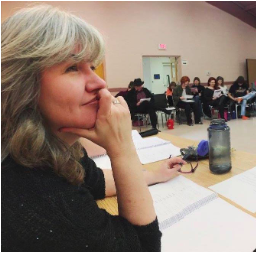 Lorna returns to SaskExpress Studio - Saskatoon for her 19th year as an instructor and 14th year as Studio Director. Lorna has worked on more than one hundred and fifty productions with companies including Saskatoon Summer Players, Ppl R Ppl Productions, Persephone Theatre, Ageless Players, Gateway Players, and Dancing Sky Theatre, with experience as a director, actor, stage manager, playwright, composer, child supervisor, acting coach, and sound designer. Directing credits include Spamalot, Shrek, Seussical, The Pink Panther Strikes Again, That Darn Plot, and The Diaries of Adam and Eve. Favourite on-stage roles include Elizabeth Proctor in The Crucible, Rivka in In The Cards, Martha in The Secret Garden, and Marcia Gudereit in Gold On Ice. As a playwright and composer her produced shows include DragonCatcher, Missile - Toe, Gwydian's Cross, The Gift and the G.R.I.N.C.H., and Enviro-Mental. As a Stage Manager, Lorna recently worked Rocky Horror Show, Cabaret, and Rent. As a Casting Director/Producer Lorna worked with Cheshire Smile Entertainment on Space Stretch and Quizzine, which have aired on City TV Saskatchewan. Lorna also worked as a news anchor and reporter for more than a decade.  Lorna has also worked as an arts administrator serving as a publicist for Shakespeare on the Saskatchewan, and as General Manager for Dancing Sky Theatre. In addition to her work at SaskExpress Studio - Saskatoon, Lorna often facilitates workshops and adjudicates provincially. From time to time her alter-ego Cuddles the Clown comes out to entertain. In 2004, Lorna was honoured as the youngest recipient ever of Theatre Saskatchewan's Lifetime Achievement Award.